Learning to Code with eTextiles

So you're ready to learn to code your eTextile projects.  The process of learning to code will take you down a circular learning path that will have you cycling from a state of  "fuzzy understanding"  to a state of "clarity and aha's".

This is because there is so much front loading when learning to code.
There is a certain degree of "take it for granted"  that THIS BUNCH OF CODE has to be in every program. Don't ask why  just make sure its there!
This drove me crazy when I first started to learn to code.

The teacher in me wanted to not move on until I understood each line of code and every piece of syntax in that line of code.
Eventually I learned that I had to let go of that need to know what each word meant.

~ I had to trust that I could create an understanding of what was happening based on the experiences I was about to go through. .

~ I had to accept that for every new line of code there was so much "foundational" information that I was not ready to learn that it would feel fuzzy at best.

~ I had to  make a deal with myself that it was okay that my  understanding of a phrase was fuzzy and that it was okay to move on as long as  I had a general idea of what that line of code does or why it was there.

This was not so different than learning English.  When I first went to school,  I only knew six words in English.  We grew up speaking French in our home.  But that didn’t stop me from going to school.  Nobody pulled me aside and made sure I understood every word the teacher was saying before I was allowed to move on.  I started to  hear certain words in context more often than others.  I gained a general idea of what words went together.  Eventually my brain started to recognize patterns and I was able to use those patterns when I wanted to communicate with those around me.  So now I had to trust that my brains ability to recognize patterns would help me learn to code in a similar way to my learning English.

So for now I'm going to proceed with this series of post with the assumption that this is okay.
So I'm working on a premise that it's okay to

This will probably make some computer science teacher shudder  and I welcome anyone who understands computer science vernacular to correct and clarify in the comments.  I won't take it as criticism and welcome learning the correct language to accompany my understanding of what's happening in my eTextile project, and I will make the necessary corrections to my blog post. 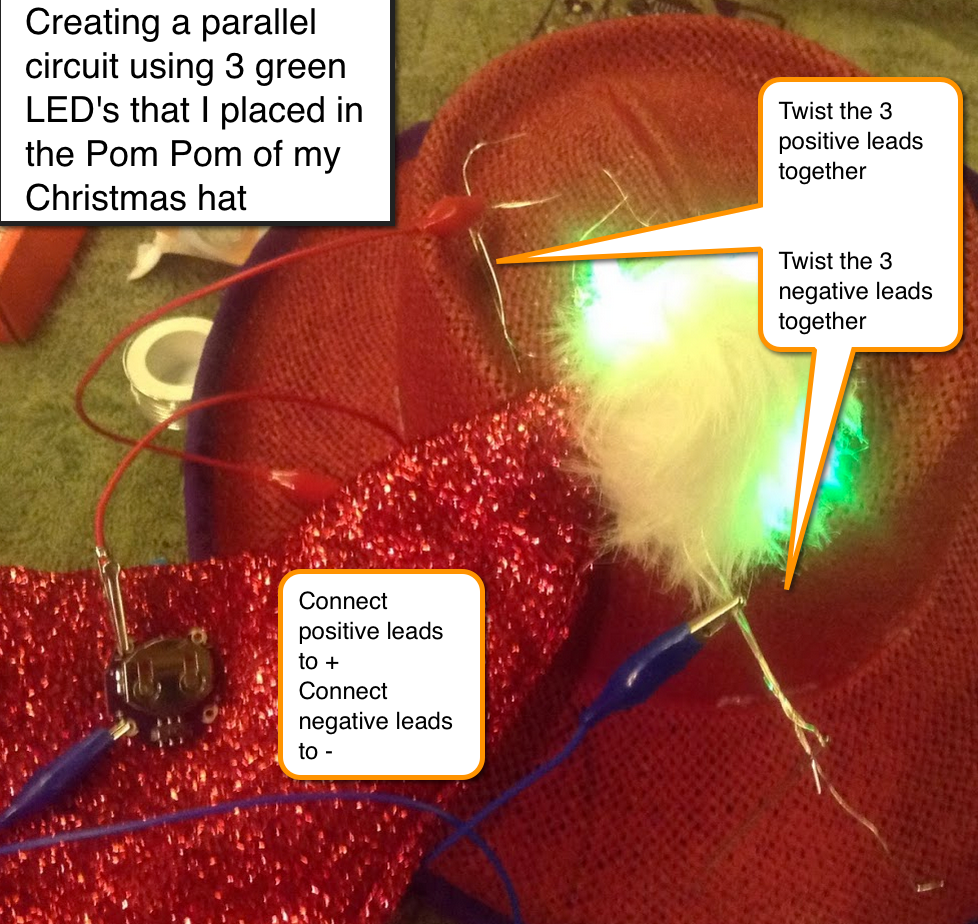 Unfortunately,  you can't learn to code using a simple parallel circuits made out of LEDs, batteries and alligator clips.   You're going to add a "mini"  computer" to the mix.  This is where the LilyPad  Arduino board comes in.  The Lilypad  Arduino Simple contains a tiny microprocessor chip that you can program along with some several pins in the shape of eyelets that you can sew conductive thread to.  In the next few lessons you are gong to learn how to CODE the Lilypad's  "mini" computer take your eTextile projects to a new level.

Let's take a look at the Lilypad. 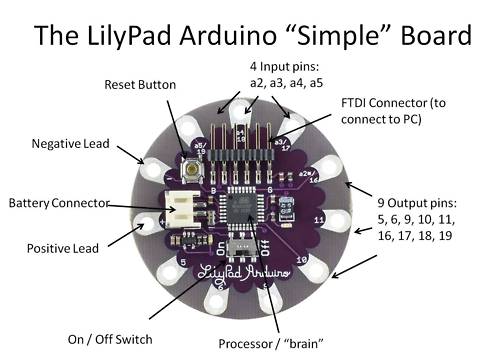 I created some simple directions for setting up your LILYPad with your  laptop/desktop computer here.  Once your LilyPad is attached to your computer, you'll be ready for the rest of this tutorial.


Let's connect the positive and negative leads from the GREEN POM POM to our LILYPAD board. 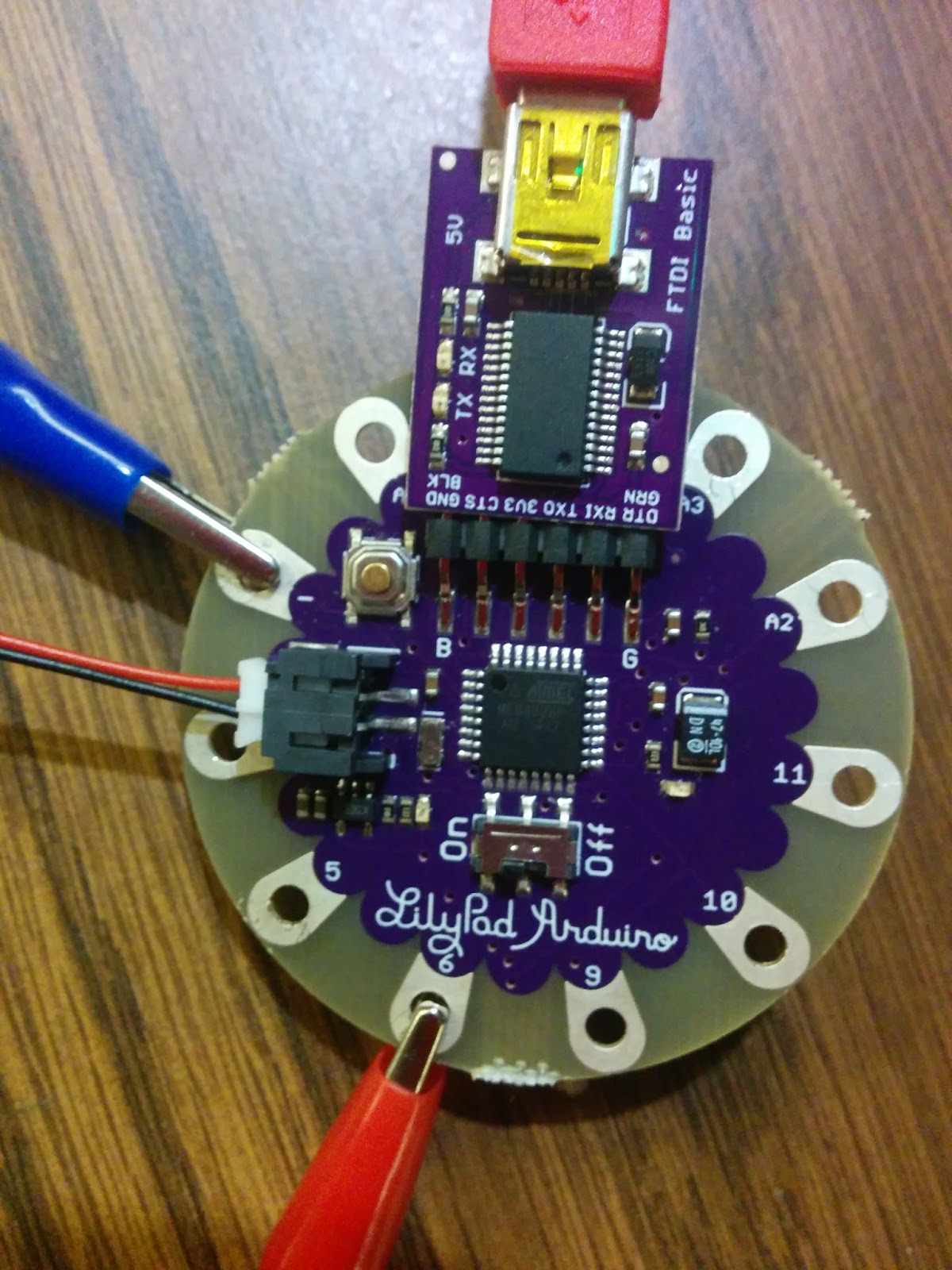 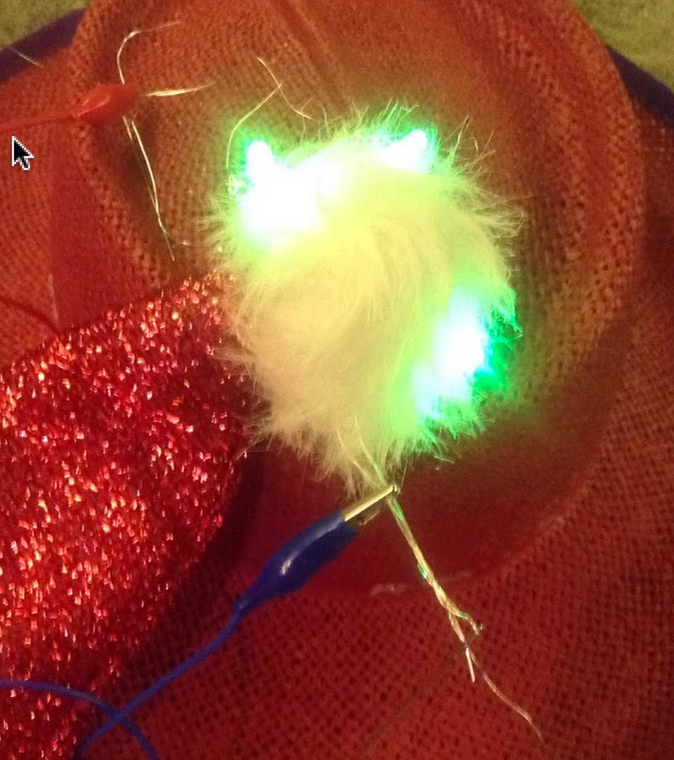 There is no need for a battery, since your computer is providing the power.  (But it's okay, but unnecessary to have a LIPO battery attached now, but you'll need it later).

Now let's COPY the following CODE (in yellow)  into the CODE Area of you ARDUINO software.
This is a very simple program I wrote to make the Green LEDs light and to introduce you to some CODING basics.

/*
The following commands are used to SETUP your Lilypad each time it runs
and only run once when you power up your lilypad and run your program
Tell the Lilypad whether each pin should send OUT info or take IN info
To light an LED you have the Lilypad has to send OUT info from the pin
*/
void setup()
{
pinMode(ledPom, OUTPUT); // set up the ledPom pin so it sends OUT info
} 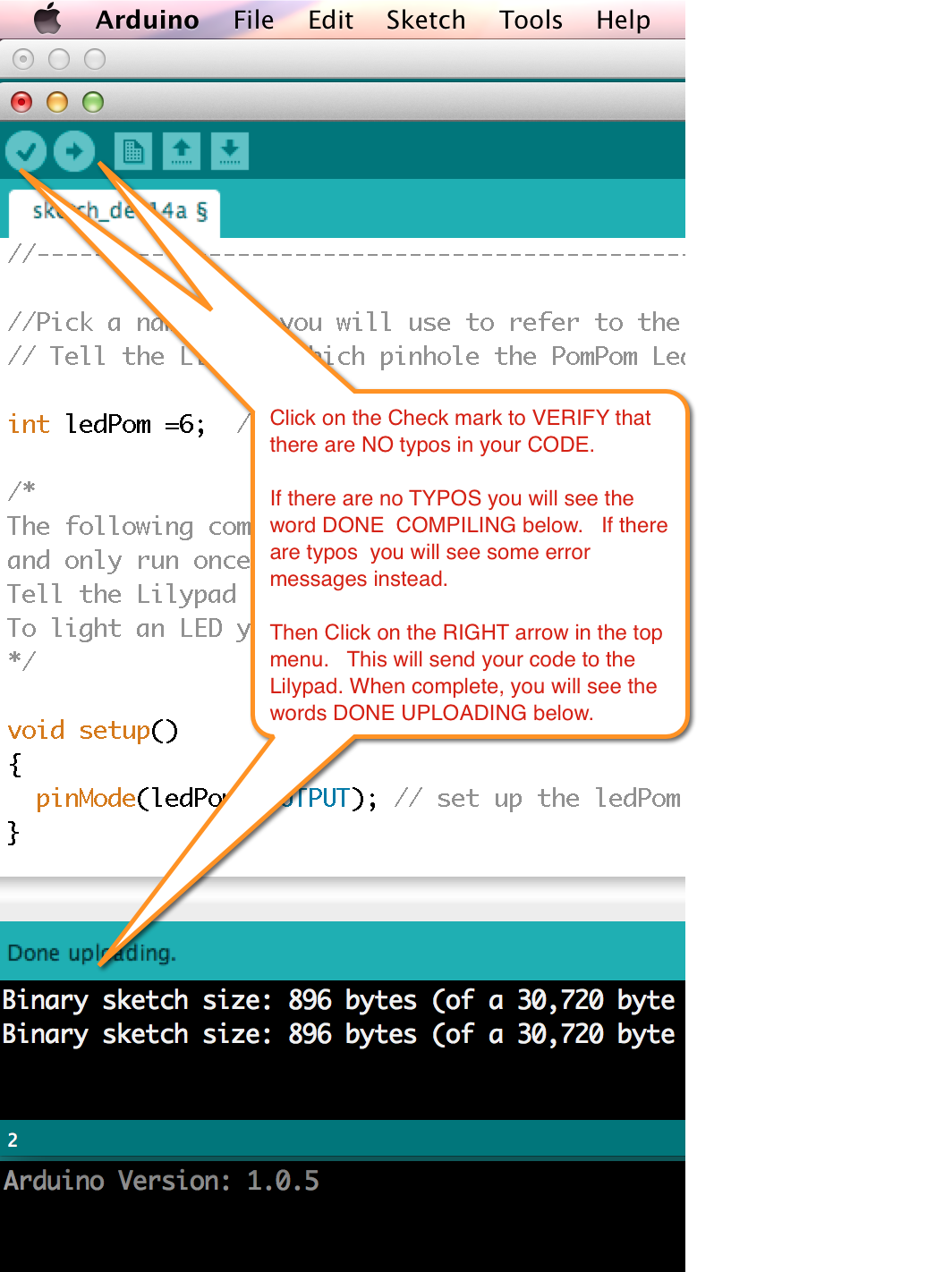 This tutorial was created to help you understand that every part of the Arduino program is made up of a few basic sections.  Once you understand that each program has different sections, you will start to look for them and see patterns in what type of information belongs in each section.

Take a look at the diagram below and look for the sections that are COMMENTS only.  The computer ignores comments, but humans who read the program love COMMENTS.  It helps us understand what is going on in in language that we humans can connect with.   There are two ways to add Comments to your code. 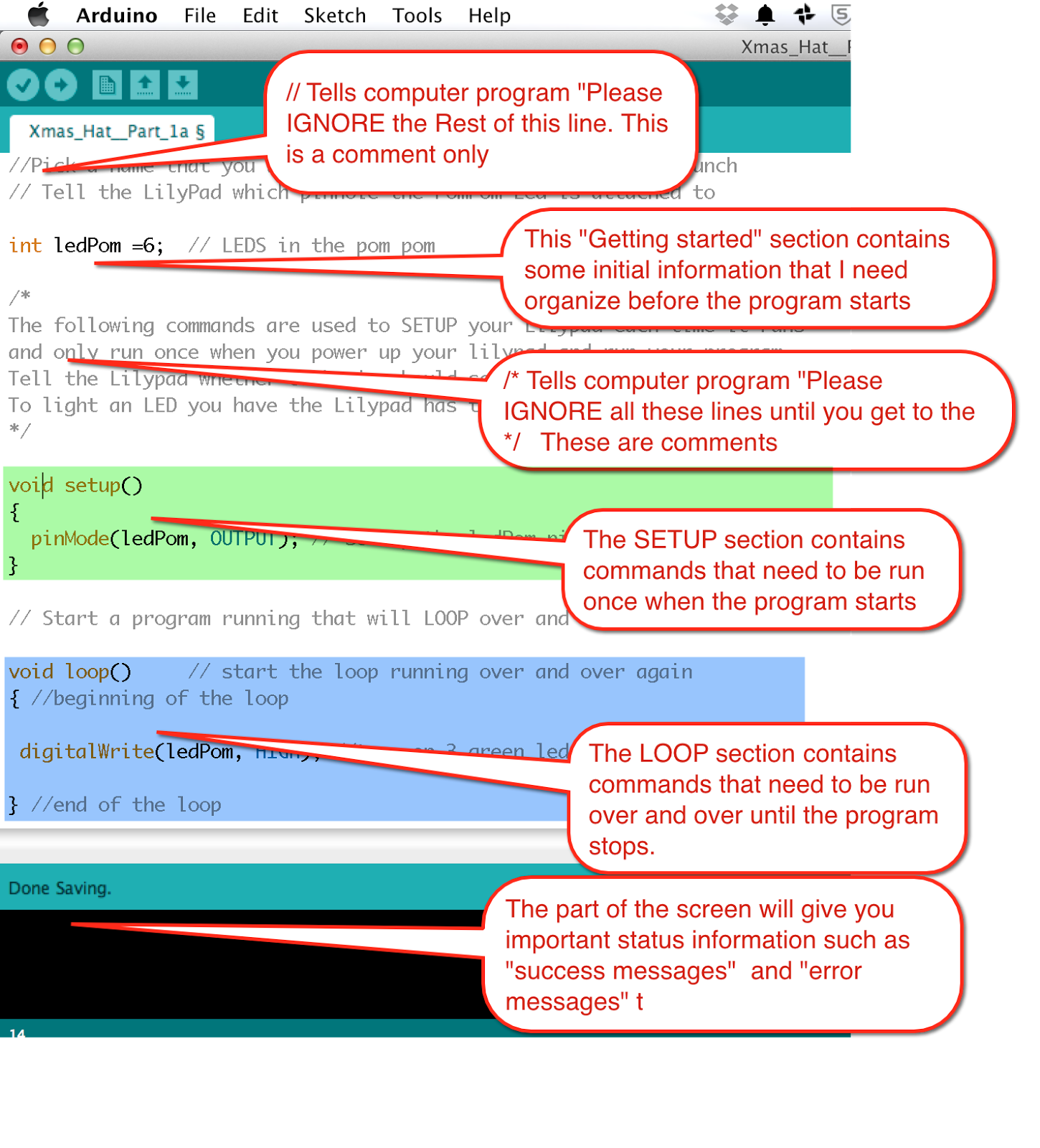 The rest of the computer code above had 3 sections.

The Getting Started Section

This section will organize some key pieces of information that my program needs to fun. I won't go into all the types of information that can go in the Getting Started section,  but I like to think of it as the "getting acquainted" part of the program.   In many activities in life we get started by introducing each other.   Once we know each other's names, we can get down to business.

In our program above, our Getting Started Section as some comments (which the computer ignores)
and it has one additional command

Notice also that the command above is followed by a comment.  The computer ignores the comment.  But you should always READ the comments.  They were meant for humans, not computers.  They will help you understand what your program is doing.
int ledPom =6;  // LEDS in the pom pom

void setup()
{
pinMode(ledPom, OUTPUT); // set up the ledPom pin so it sends OUT info
}

Notice that this sections always starts with the words void setup()
It also contains two braces {  }  one at the beginning of the section and one at the end.
Everything in between these two sections is all the SETUP work that the computer needs to do when it starts the program.  All the commands inside these braces need to run ONCE and ONLY ONCE when the program starts.  Notice that each command ends with a semicolon ;
Be careful to include these or not accidentally delete them.  Missing semicolons are the most common mistake when starting to code.

Some of us are pretty good listeners.  Others are good talkers.   If you were a pin on the LilyPad would you rather "listen"  or "talk"?  Remember that you can't do both.    What would the command look like if you chose LISTEN?   What command would you write if you changed your mind and wanted to be a TALK instead of LISTEN?

Here is how I would program myself to be a listener and wait for information to come to me
pinMode(Lucie, INPUT);

Every command that needs to be done over and over should be put inside the LOOP section. In our small program we only have one command.   This command tells our computer to turn the POMPOM  leds ON.   The digitalWrite command means "send out this information"  in the Parentheses ( )  we are told which pin should send out information ledPom and what information it should send out  HIGH  (notice the semicolon);

We know that pin 5 was named ledPom in the Startup section.
We know that the positive lead of our Pom Pom LED's are hooked up to pin 5.
So when pin 5 sends out a HIGH level of electricity, the PomPom LED attached light up!
(as long as their negative lead is also attached to ground (negative)
See earlier lessons for  how to complete a circuit.

Here is the Loop section with comments

void loop() // start the loop running over and over again
{ //beginning of the loop
digitalWrite(ledPom, HIGH); //turn on 3 green leds in pom pom

Finally you've written your first eTextile program
Here is what the whole program looks like.  In the next section we will learn how to make to turn off the LED's,  make them blink,  make them light in a certain order and more.

/*
The following commands are used to SETUP your Lilypad each time it runs
and only run once when you power up your lilypad and run your program
Tell the Lilypad whether each pin should send OUT info or take IN info
To light an LED you have the Lilypad has to send OUT info from the pin
*/
void setup()
{
pinMode(ledPom, OUTPUT); // set up the ledPom pin so it sends OUT info
} 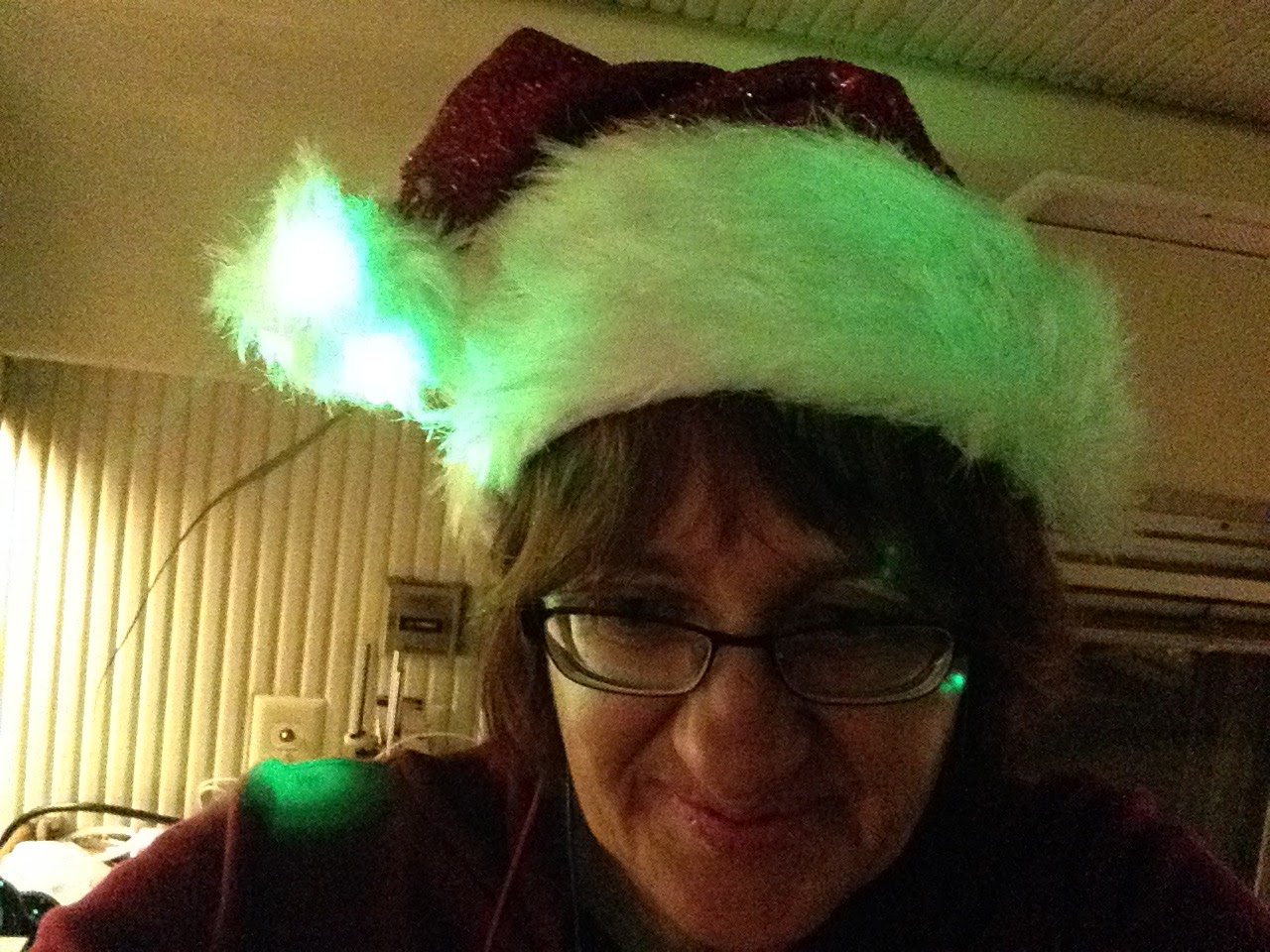 Posted by Lucie deLaBruere at 12:22 AM 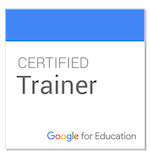 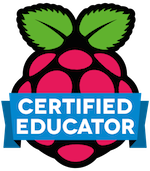